Digit Debates: Perspectives on the future in the sociology of work 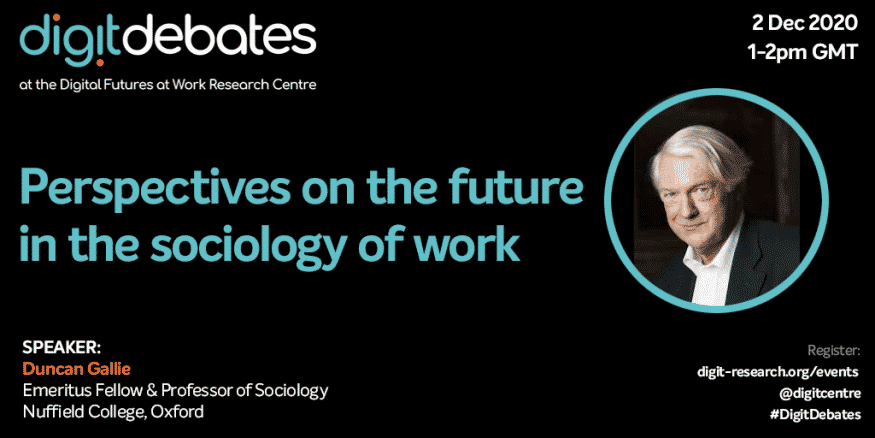 The current concern with a new digital transformation has once more placed the future of work at the centre of the public and research agendas. As sociologists of work seek to grapple with its potential implications, it is perhaps salutary to consider the fate of their earlier attempts to forecast the future. This talk examines the empirical success of the major theoretical forecasts of the early postwar period and their successors in the 1990s. The last seven decades of research should make us careful about ready predictions of the direction of social change, attentive to the dangers of extrapolating from ‘cutting-edge’ developments, and aware of the complexity of trends and the factors that can moderate them.

Professor Duncan Gallie CBE FBA is an Emeritus Fellow of Nuffield College, Oxford. His research focuses on comparative European analysis of the quality of employment – in particular with respect to skill development, job insecurity, and participation at work. He was a member of the EU Advisory Group on ‘Social Sciences and Humanities in the European Research Area’ for the Sixth Framework Programme. He served on the French Government’s Expert Committee on Psycho-Social Risks, which produced the Gollac Report (2011) and was a member of the Advisory Committee of a recent OECD initiative to provide national guidelines for monitoring the quality of work. He was Vice-President Social Sciences (2004-2006) and then Foreign Secretary and Vice-President of the British Academy (2006-2011).

Gallie, D. (1978) ‘In search of the new working class: Automation and social integration within the capitalist enterprise‘, Cambridge University Press.