Over the last two years, there has been a lot of interest in virtual teams.  During the Covid-19 pandemic, we have seen an unprecedented number of face-to-face teams transition to become virtual ones.

These virtual teams were not formed by choice or as a means for organisations to develop a competitive advantage; rather, they were often enforced as a matter of organisational survival.

However, while there has been a lot of hype around virtual teams during the pandemic — and ongoing interest in the relative merits of face-to-face versus online teamworking — it is important to recognise that virtual teams have existed for a long time.

A well-established body of research has shown how, traditionally, virtual teams have been deployed as part of organisations’ efforts to access geographically distant talent, capitalise on time differences, or to develop a competitive advantage. We suggest two key learnings from the rich body of knowledge about pre-pandemic virtual teams, which can be applied to the ‘new’, post-pandemic context.

All virtual teams have the following two similarities which make them different from face-to-face teams:

However, new research shows that newly formed virtual teams are also different from earlier ones in several ways. For instance, they involve locally (rather than globally) dispersed members, are largely home-based (rather than office-based) and are hybrid by default (instead of pure virtual) given that all members of those teams had existing working relationships from the face-to-face environment.

Leadership (or e-leadership) is an important factor contributing to virtual team success. According to earlier literature, the e-leader’s task was to minimise the negative effects of the forces that had the potential to ‘divide’ the team (e.g. geographical dispersion), while maximising the forces that could help create cohesion (e.g. sense of identity). Such suggestions were directly linked to the configurational characteristics of pre-pandemic virtual teams, which were primarily global (involving globally dispersed members), temporary (often with a clear end date), and highly multicultural.

“… members [of newly formed virtual teams] are facing challenges outside of work and the teams and organizations that are best able to navigate the complex challenges thrown their way are those who have leaders who exhibit patience, flexibility, and adaptability.” (Gilson et al., 2021, p.5)

The above quote hints at new characteristics that leaders of newly formed virtual teams should exhibit: patience, flexibility, and adaptability. In fact, although e-leaders’ task is still related to creating cohesive virtual teams, recent literature has posited new areas that these e-leaders should look after (see Figure 1 for a depiction of those areas).

Figure 1, below, illustrates in a creative way what new e-leaders’ responsibilities look like. It is based on our findings from a state of the art, semi-systematic literature review which explored how much of the existing literature in this area is relevant to leaders of newly formed virtual teams. 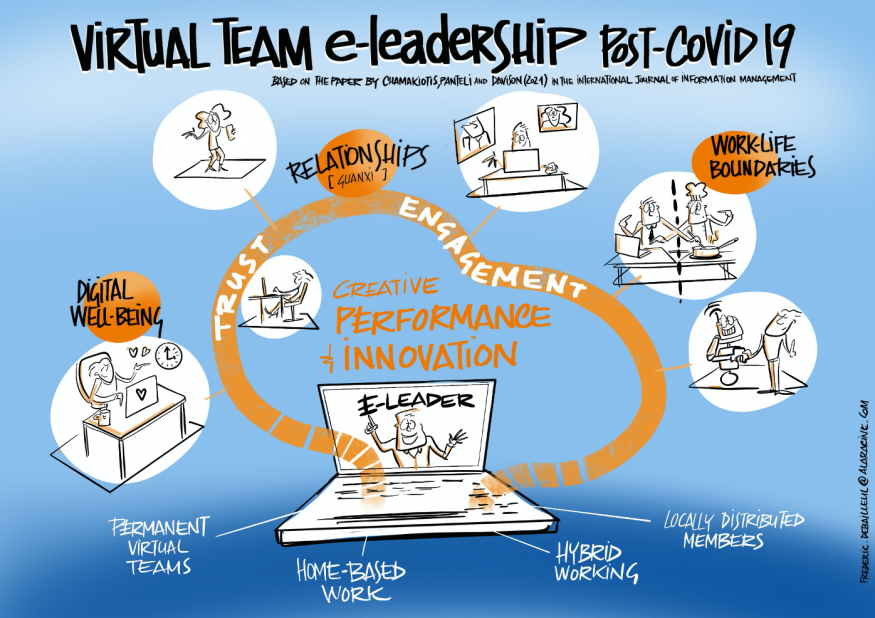 Leading the virtual teams of the post-pandemic era

Based on our research, we suggest that e-leaders, aiming for creative performance and innovation, should look after the following aspects of their virtual teams:

Future research could further explore and complement the above areas as we navigate an unprecedented, large-scale uptake of (for some) new ways of working. In the meantime, these emerging principles may offer a useful guide to leaders and members of newly formed virtual teams, policymakers and HR professionals.

Search and filter the Blog

Join the Digit mailing list to keep up to date with the latest news, publications, events and blogs from the Digital Futures at Work Research Centre.

If you would like to contribute to the Digit Blog please email us with a brief 100 word summary. You can find guidance for contributors here.